I tried another card technique from the CAS class. This time multiple die cuts were cut from coloured cardstock and placed on a card front of the same colour- tone on tone. Jennifer said in her video that she cut one die cut from the coloured cardstock but cut the remaining die cuts from white so that she did not waste her coloured paper, but I had lots of red as it was recently on sale at Michael's so I wasn't worried about using a lot of it.
With Valentine's Day fast approaching, I thought this was the perfect opportunity to make a few cards.
Here are 3 cards with slightly different approaches.

The card on the far left was made using multiple cuts of Je t'aime (from the Cricut cartridge Ashlyn's Alphabet) from red cardstock, then secured to a red piece of cardstock which was then adhered to a white card. I liked it but... The card on the far right was also cut from multiple layers of red cardstock but this time I covered the front of the die cuts with Ranger's Glossy Accents-nice and shiny. This gave it a little more pizazz. Because the die cuts were shiny I thought the card base should be as well so used a glossy piece of cardstock this time. Not too bad! 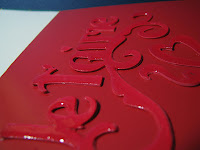 The most interesting and most effective card is the middle one. I went with card base and first layer cut from pearlized red card stock and cut the remaining layers from white cardstock as Jennifer suggested. Magnificent! The white cardstock is the way to go for under layers :) The Te Amo and butterfly are also cuts available on Ashlyn's Alphabet. 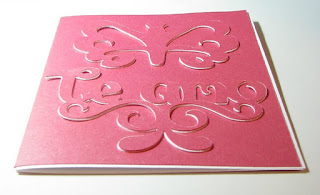 I will be using this technique again.
Posted by jennifer at 9:58 AM No comments: Links to this post

Thought I would give Jennifer's Wet Inking Technique a try. Here is the result. 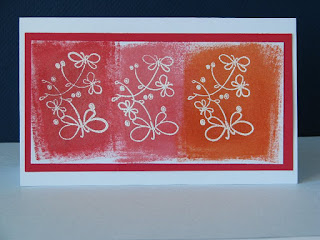 I am unsure if I am going to add a banner sentiment or not... or just wait to see how the inside of the card develops.In this image it is hard to tell that the card has a pearlized finish. Below demonstrated this a little better. 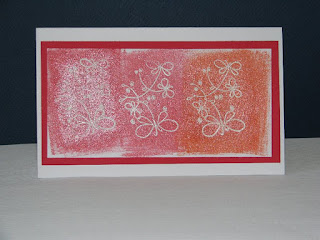 Posted by jennifer at 4:06 PM No comments: Links to this post

Although this looks like a New Years card (because I used the New Years stamp from Studio G) I think I may be able to get away with using it for an anniversary card. What do you think? 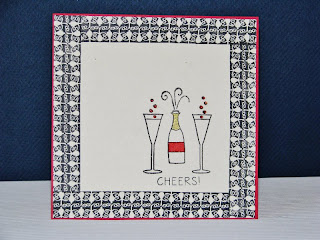 Posted by jennifer at 3:58 PM No comments: Links to this post

I signed up for another one of Kristina, Jennifer and Julie's card classes called Clean and Simple Cards (CAS). I have not been able to participate as much as I would like because my school assignments are dominating my time. I did however, manage to escape to my scrapping room for a few hours last night. Here is what I came up with. 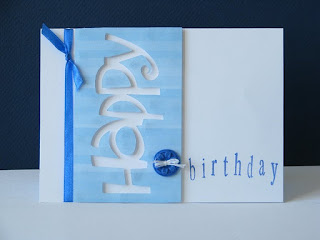 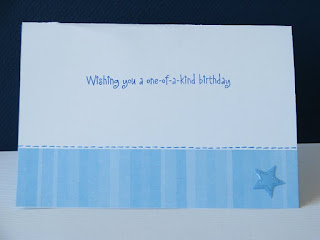 This is the inside of the card. I have recently changed my thinking about the inside of cards; I like to embellish them as well.
Posted by jennifer at 12:03 PM 1 comment: Links to this post 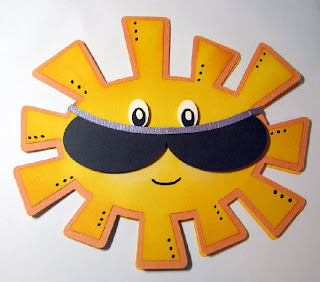 DH's Christmas card My hubby wanted new sunglasses for Christmas, although I knew what type he wanted I didn't feel comfortable picking them out for him so I created this card that contained a gift card. I used the Doodlecharms Cricut cartridge for the multiple sun images and freehanded the remaining pieces. I added some Spiced Marmalade Distress ink to soften the edges. The doodle dots and smile were drawn with an embossing pen from Sukura.The sentiment on the inside was stamped with Versamark and the heat embossed with silver. The part of the card holding the gift card could have been better but I was running out of time and I knew it would not bother hubby at all that the holder didn't match. 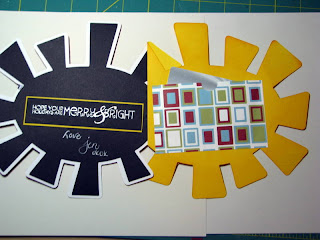 Posted by jennifer at 11:52 AM No comments: Links to this post

Experimenting with stamps and embossing powder

I recently bought a couple of stamps at my LSS because I liked the images but when I got them home I thought, "how do I stamp with these?" Well with a little bit of embossing powder, some distress inks and two kinds of paper- white glossy card stock and a patterned piece of card stock here is what I have come up with. When I make them into cards I will post again. 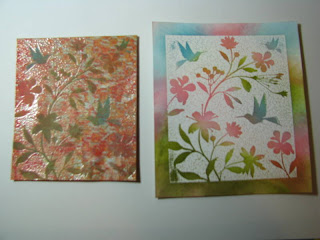 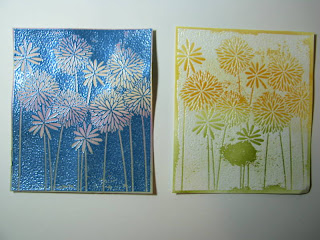 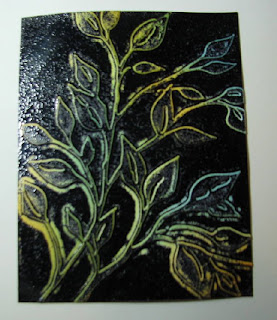 The image above was created by putting Versamark on my Cuttlebug emossing folder and then covering the image with midnight black embossing powder. My hope was that only the recessed part would have embossing powder but it didn't work out that way. However, I like the look that was left after heat embossing. I then used distress inks and rubbed various colours over the remaining white areas . Now to come up with a card design to apply it to :)
Posted by jennifer at 7:44 PM No comments: Links to this post